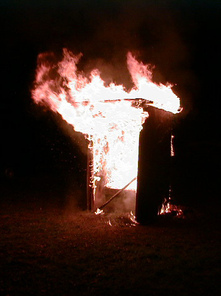 After attending the last “Wildomar Community Parks Funding Measure Citizen’s Oversight Advisory Committee” which was attended by all of 2 citizens, one being myself, I came away with some questions which I asked to be answered at the end of the meeting, as the usual format for the City of Wildomar was in place, a three minute diatribe before an item is discussed.

During the meeting it was discussed that a porta-potty would be placed at Windsong Park. It would be a newer type of restroom facility, in place of the single unit that was used in the past. Like the one that was apparently tipped over a number of times and eventually set on fire costing the city $775.00 to replace. This newer type unit would be placed on a slab and possibly contain facilities for both sexes along with a place to wash up afterwards.

The question I asked was “ Is there a stub-out for a sewer connection located at Windsong Park and if so where is it?”. It occurred to me that before a slab is placed it should be somewhere close to this possible future sewer connection so that money is not wasted when the park is eventually connected to the existing sewer system, which should be less costly than the monthly fee ($140 per month)to empty the single portable units.

Some may ask why I would ask this question, the answer is HISTORY: Having moved to this valley before the “Windsong Tract” was built, I remember the controversy surrounding the requirement that parkland be dedicated, with the developer balking because we had no park district to accept and maintain it. The land was eventually dedicated in March of 1989 with this statement on Tract map 23196 “We hereby dedicate to public use for Park purposes, Lot 58. With that dedication the developer was required to provide all utilities to the site per the Quimby Act, along with the Elsinore Valley Municipal Water District requirement that when a sewer line is placed a stub-out or future connection be place to every parcel along its route.

I was assured that this would be looked into and an answer forthcoming. I also followed up with the Chairman of the Oversight Committee via e-mail a couple of days later. Its now 2 weeks later with no answer. So much for asking city officials.

5 thoughts on “WHERE TO GO WHEN YOU HAVE TO GO”