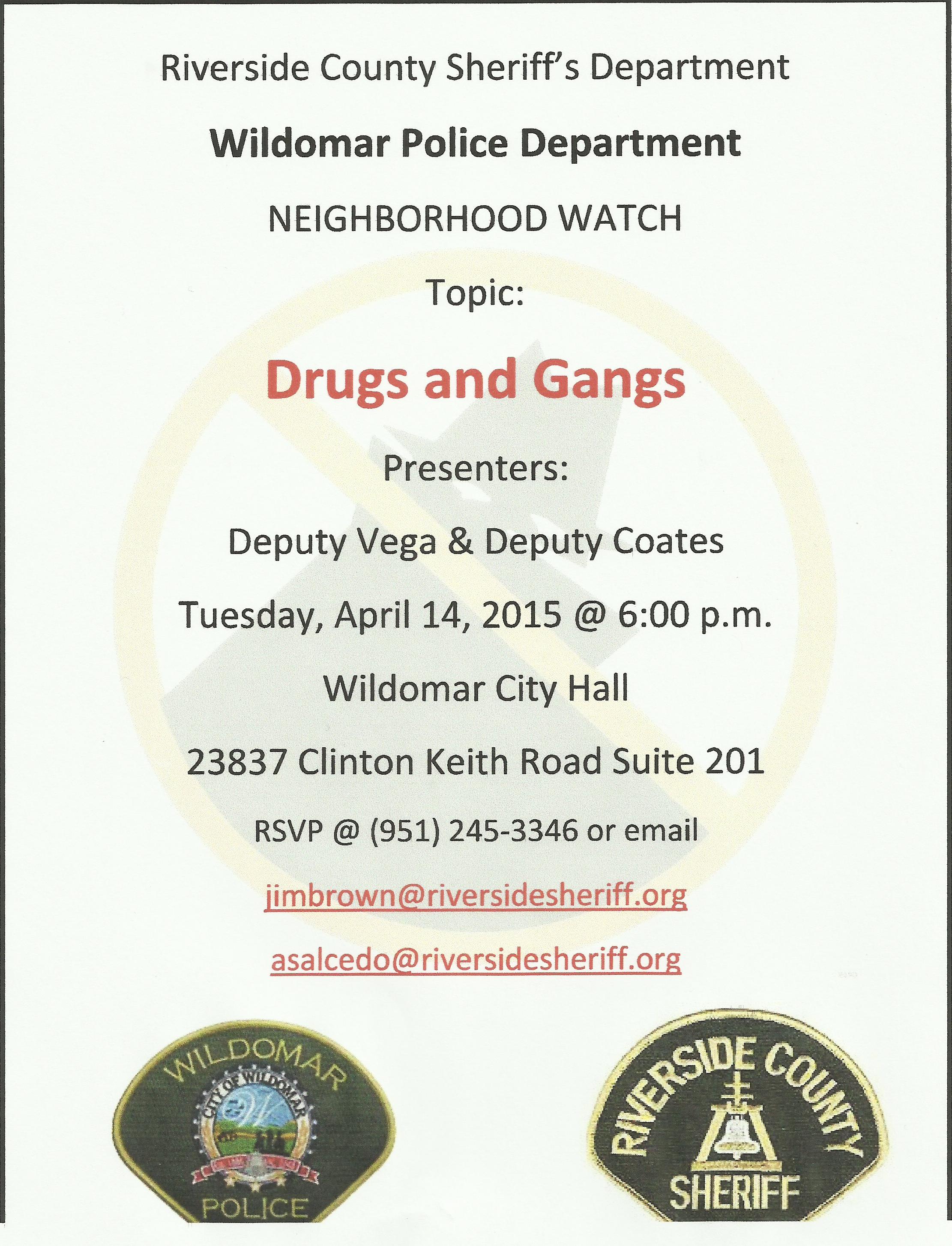 At a time when funds are short which has resulted in a severe shortage of deputies Wildomar is finally going to take a step in the right direction and conduct a Neighborhood Watch Presentation.
According to deputies present at the last city council meeting Wildomar currently has 53 neighborhood watch members and 19 block captains scattered throughout a city of almost 34,000, this rivals the current law enforcement contingency.
Tuesday evening April 14, 2015 at the city council chambers starting at 6:00 PM the Riverside County Sheriff’s Department will make a presentation on “Drugs and Gangs”.
If you want to make a difference in the quality of life for this city please attend.

At the most recent wildomar city council meeting congratulations were extended to the Riverside County Sheriff’s Department for the recovery of recently stolen items. A big hands together indeed for a job well done. What wasn’t given was acknowledgment that a LOCAL CITIZEN, who after hearing about the theft in one of the many forms of local media, called in the tip that started the Sheriff’s Department on the road to recovering these items which had been scattered to the winds, items having been found in 4 locations at last count.
Further evidence of the utter contempt by the city council for the Average Citizen of wildomar was during the discussion of future agenda items, one being obtaining a proper zip code for the residence of the most norther section of town which still retains a Lake Elsinore mailing address.

Six years and they are finally thinking about it.

During the discussion all anyone on the dais could remember was the loss of the “Bear Creek Golf Resort” to a Murrieta zip code by the post office, this occurred at a time when half the community of wildomar had a Lake Elsinore zip code. I did, we started out with a Wildomar Zip code and were switched to Lake Elsinore only to be returned back to Wildomar a few short years later. The thing is, no matter what zip we were still in the community of wildomar.
The residence of Bear Creek not only had their zip code changed but the County of Riverside shifted the boundaries of the community into the new City of Murrieta not the Post Office.
Also mentioned during this portion of the session was changing the Historical name of the Baxter Street off-ramp to something more pleasing to the council, like, Wildomar Parkway. Why the name change, nobody can remember who Baxter was or they know and are not pleased he called Murrieta home.
Near as I can tell he was Albert. S. Baxter, farmer, born in 1867 in Illinois who at the time he lived in the area called Murrieta his home, this is where his twin boys claim they were born.
Maybe we could rename it Alameda del wildomar to go along with Alameda del Monte. Alameda translates to Tree lined Avenue. Better yet why not Brown Ave seeing as how the Brown house is rotting away within view of the off ramp.