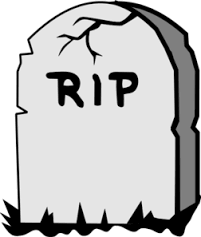 On Thursday night May 28, 2015 at 6:30 pm in the Wildomar City Council Chambers there will be a memorial service for the Measure Z Oversight Committee and the democratic process.

Despite repeated request for information concerning the advertisement of the impending vacancies ordered by the Wildomar City Council to fill these positions, nothing had been forthcoming.

Slipped in with other documents requested and received on May 21, 2015 was a copy of the “Maddy Act” list which by law is to be posted at the local library, in this case the Mission Trail/Wildomar Library.

54972. On or before December 31 of each year, each legislative body shall prepare an appointments list of all regular and ongoing boards, commissions, and committees which are appointed by the legislative body of the local agency.
This list shall be known as the Local Appointments List. The list shall contain the following information:

(a) A list of all appointive terms which will expire during the next calendar year, with the name of the incumbent appointee, the date of appointment, the date the term expires, and the necessary qualifications for the position.
(b) A list of all boards, commissions, and committees whose members serve at the pleasure of the legislative body, and the necessary qualifications for each position.

54973. The Local Appointments List shall be made available to members of the public for a reasonable fee which shall not exceed actual cost. The legislative body shall designate the public library with the largest service population within its jurisdiction to receive a copy of the list.
I paid .10 for the copy I received. 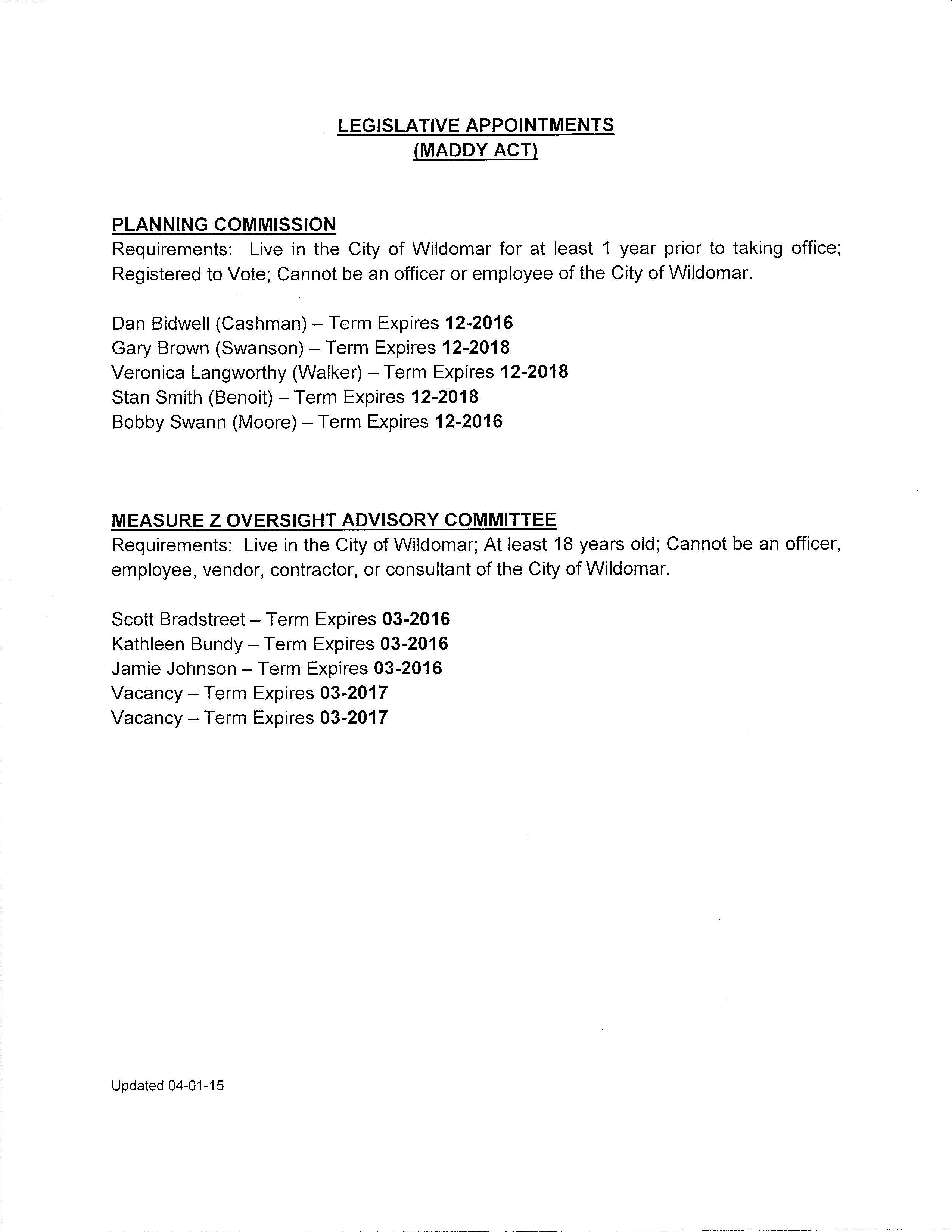 I guess this “Maddy Act” list was supposed to be the cities response to my “California Public Records Act” request, originally sent via e-mail on April 5, 2015. A second request for the same information was sent to the city via “Certified Mail” on April 27, 2015.
At the most recent city council meeting I brought up the fact that city staff was not responding in a timely manner to public records request which are, by California Government Code, to be answered within 10 days.
My two request were sort of answered 46 days and 24 days after being submitted. Sort of because there was no reference made to either Public Records request.

Also brought up was the fact these positions were never advertised as so directed by consent in the city council agenda packet for the meeting of January 14, 2015.

At this time it would be appropriate to declare the scheduled vacancies and direct the City Clerk to advertise the vacancies. The City Clerk will advertise starting on
Thursday, January 15, 2015, and will accept applications through Tuesday, February 17, 2015. These applications will be given to each Council Member as they are
received and the appointments will be scheduled for the regular meeting of March 11, 2015.

I can hear it now, the “Maddy Act” met this advertising requirement and it might have in regards to the letter of the law had this list actually been posted at the library as required by law on December 31, 2014.
Low and behold I happen to have a picture of the bulletin board located at the Mission Trail/Wildomar Library taken on January 20, 2015 at 1:03 PM which clearly shows this list is AWOL. 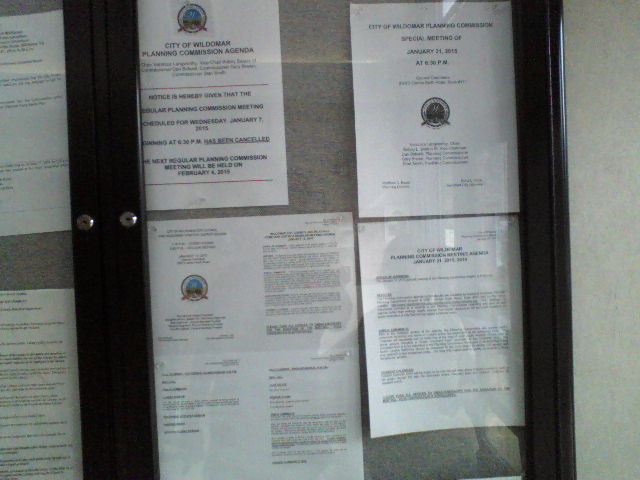 Right side of Bulletin Board. 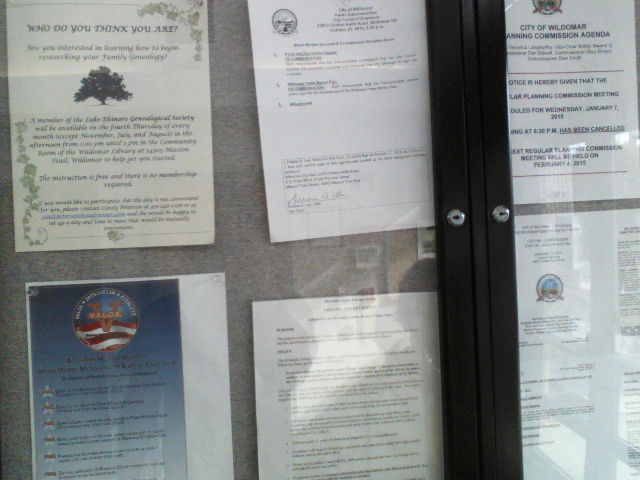 Why would I have a picture of the bulletin board you ask. I was at that time attempting to verify the posting of a notice cancelling the January 22, 2015 meeting of the Measure Z Oversight Advisory Committee for which it was sworn to in a declaration as having been posted at the Library, the Post Office and City Hall. This notice was at that time missing, from the Library and the Post Office. (The closest item posted at the Library was the Measure Z Oversight Meeting and Agenda for October 23, 2014).

In its current location on the bulletin board was posted a notice from the Lake Elsinore Genealogical Society announcing the availability of a member on the 4th Thursday of the month.

These pictures along with a copy of this blog are being submitted to the appropriate parties to determine if any legal wrong doing has occurred.

When a city starts lying about the little things one has too wonder what else are they hiding.