There will be a parks subcommittee meeting this week, Wednesday January 6th at 5:00pm, where the year’s parks event calendar will be set. As there been no notice posted this meeting will be held in violation of the Brown Act.

Not sure why the city is even bothering to do this as the Rotary BBQ is a done deal even before the subcommittee meets or the city council votes. 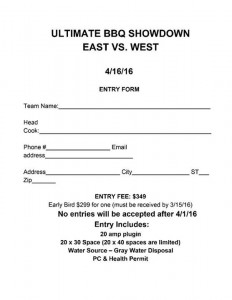 This posted on the Rotary Club Facebook Page December 30, 2015

Last years BBQ cost the this city a lot of money to add additional electrical capacity just for this event, maybe as there has been no independent annual audit submitted to the city council for approval as required by law (CGC 50075.3). The Measure Z Citizen Oversight committee has not met since July of last year

At that meeting two members had not completed their end of the fiscal year assessment of the city parks therefore any assessment will not reach the city council until sometime after the next Oversight Committee meeting in late February.

California Government Code 50075.3. The chief fiscal officer of the levying local agency shall file a report with its governing body no later than January 1.

During the February meeting the term of 3 positions will be coming to an end. Hopefully the city council will have properly advertised for volunteers and/or the current members will reapply.
Last year the city received one applicant in the time period declared by the city council during its January meeting. One additional applicant was selected several months later without further advertisement.

As a side note.
Another blogger made mention of the sandbag events held recently in Wildomar. It was claimed that the cost was $6000 per event for a total cost of $12,000. With this bloggers mention of approximately 165 total participants this would make the cost about $2.90 per bag.
PV Maintenance made the claim at one such event that filled sandbags could be obtained by the city locally for $1.00 per bag.
ISN’T LOCAL CONTROL WONDERFUL