Something as simple as a dirt trough is so indicative of the past and the future of Wildomar. 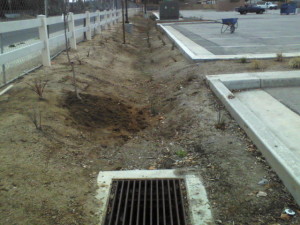 When the County of Riverside rehabilitated the 3 parks, at the insistence of a group bent on incorporating a community into a city, the county left out several important features. One of these was a bio-swale not designed until December 2008, put out to bid until July 2009 and completed September of 2010 (at a cost of $129,737) even though the parks reopened in the summer of 2007. (These dates are important because Wildomar incorporated on July 1, 2008 after several years of study by the Local Agency Formation Commission (LAFCO))
The reasons for the exclusion and later inclusion of this feature are many fold.
Chief among them was “devil may care” attitude first by the County of Riverside Redevelopment Agency (RDA) now the Economic Development Agency (EDA). This agency could just borrow the money and built what ever they wished wherever they wished, all on the cheap except to the taxpayers. Turns out money was spent on two parks not in the Redevelopment area (the one park within the boundaries currently receives enormous amounts of area runoff and is destined to become Open Channel A of the Lakeland Village Master Drainage Plan) 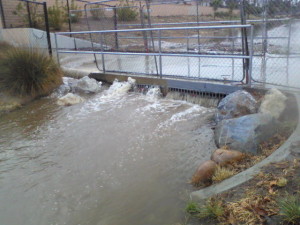 Regency Heritage Park After the bridge, water forced over due to accumulation of debris.

leaving the citizens inside of the RDA to foot the bill for 30+ years. The counties response – there close to the redevelopment area, no problem.
During the reconstruction of the parks, that the citizens closed when they defunded the previous parks district, the county paid no heed to any of the requirements of the California Water Code and totally ignored the California Regional Water Quality Control Board San Diego Region (Region 9) by failing to implement a Standard Urban Storm Water Mitigation Plan (SUSMP) or to even notify the Regional Board of this project when asked directly, on two occasions, if there were any projects started since 2005.
In response to a Notice of Violation issued in July of 2008, the County of Riverside after receiving a date certain by which a response was required, danced, telling the Water Quality Control Board they would install a bio-swale to cleanse run-off from the parking lot , install fossil filters and screens in the drain openings, stencil parking lot storm drains with “Only Rain in the Drain” signage and post educational materials pertaining to the Santa Margarita Watershed for public awareness on a bulletin board located at the concession stand/restroom complex. 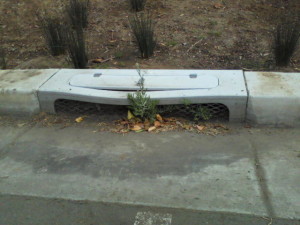 Parking lot filter, installed by County of Riverside- maintained by City of Wildomar

There are several problems with this response.
1. Marna O’Brien Park is located in the Santa Ana Watershed, which some of us locals have known since 1984. This issue was maybe unknown to Riverside County and definitely unkown to the Region 9 Water Quality Board until October of 2008. I say maybe unknown to Riverside County because the drainage system is attached to the Bryant Street Storm Drain System which flows into Lake Elsinore after passing thru Regency Heritage Park. Because of this watershed issue Region 9 allowed Riverside County to not face fines from Region 9 at that time, referring the issue to Region 8 which failed to act.
2. Riverside Water Conservation District did not have a pollution criteria index for parks, instead the criteria for “Detached Residential Development” was used per the County of Riverside’s response. Riverside County has had a Parks District since 1926 and a Water Conservation District since 1945 and yet there is no criteria for parks. Really ?
3. Although a Bio-Swale was constructed it has fallen into disrepair and to date the city has failed to properly replant it rendering it total ineffective. 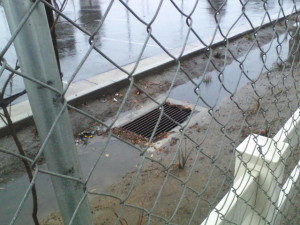 Not much natural filtering going on here.

4. The County of Riverside never marked any of the drains nor did they erect any bulletin board displaying the educational materials promised. 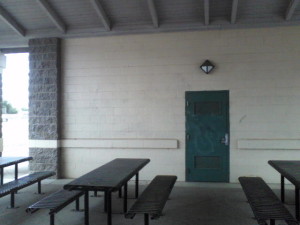 Same blank walls exist all they way around both buildings.

The City of Wildomar was in the process of taking control of the parks from the county at the time all of these events were going on and either ignored these events or failed in their due-diligence to learn of this Notice of Violation. After having been made aware of it several months ago none of these issues have been properly addressed. 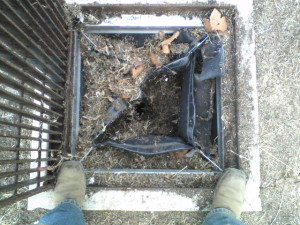 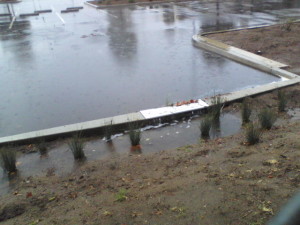 The City of Wildomar is unable and unwilling to address a simple item for which they have the funds to correct, yet we are to believe they can go on to manage a possible park in a retention basin, construct bikeways along Grand Ave and Clinton Keith (which will require numerous bio-swales due to the amount of impervious surfaces being added to the city) all of these with no monies for maintenance, good luck with that.

1 thought on “A TELL TALE FUTURE THROUGH A DIRT TROUGH”