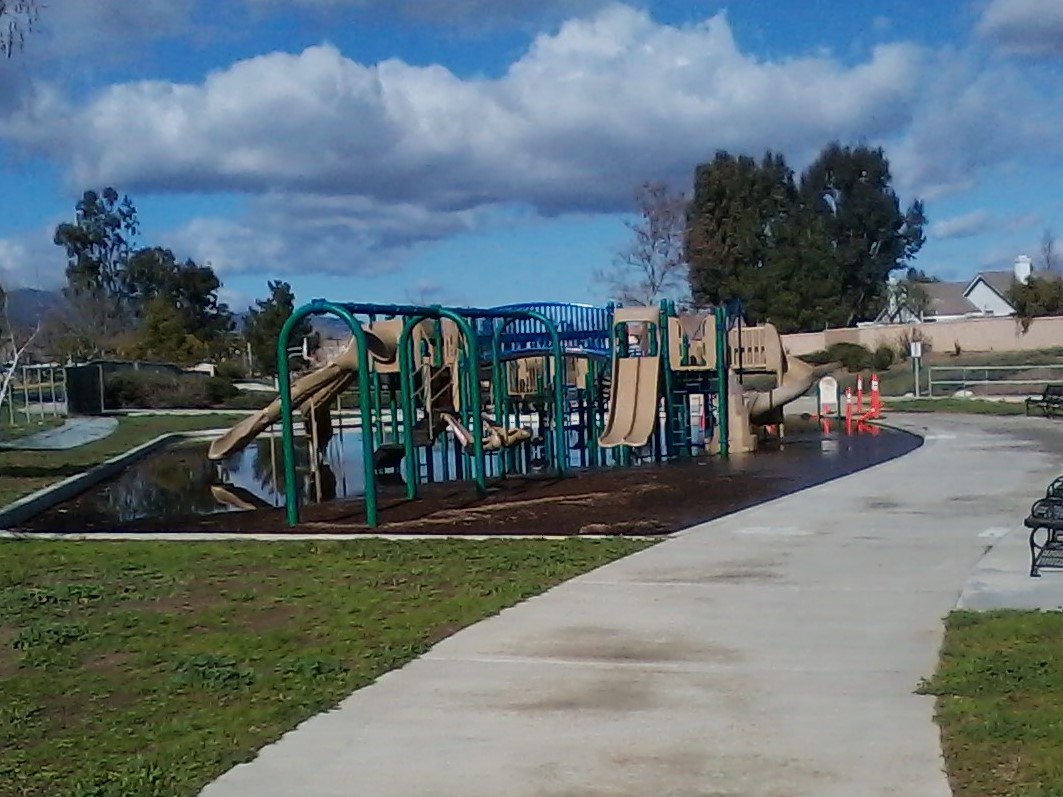 New water feature in Wildomar dubbed the Queen’s Lake is located in the Tot-Lot at Regency Heritage Park, 20171 Autumn Oaks Place Wildomar, CA 92595 near Wildomar’s only dog park.
So grab the dog and your water wings 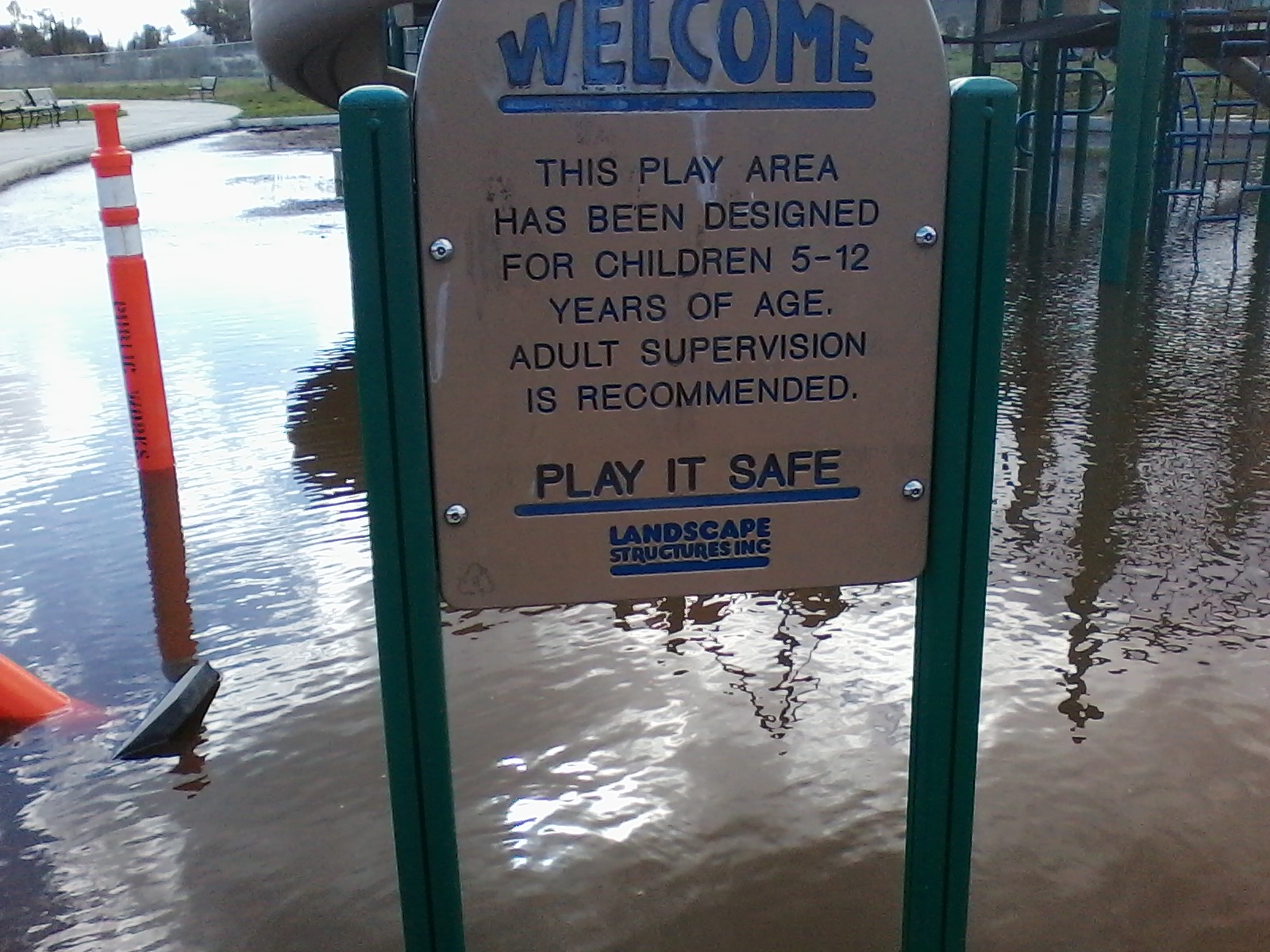 And take your children to visit this vernal swamp before it evaporates, which could take some time as this is turning out to be a “normal rainy season” unlike the past 3 years which were extremely dry. 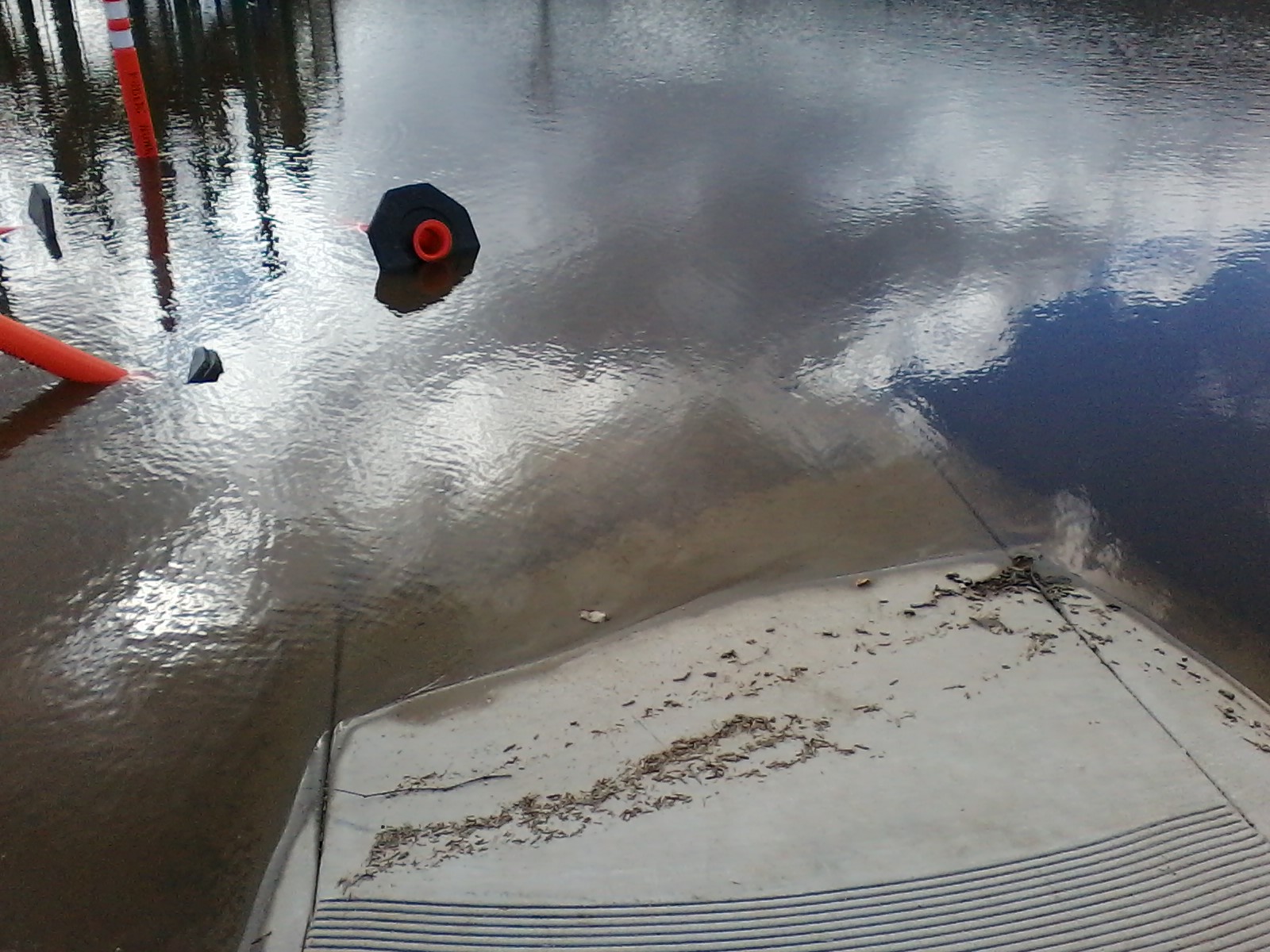 While visiting Queen’s Lake bring your water dog to play in the mud at Wildoslavia’s premier dog park, 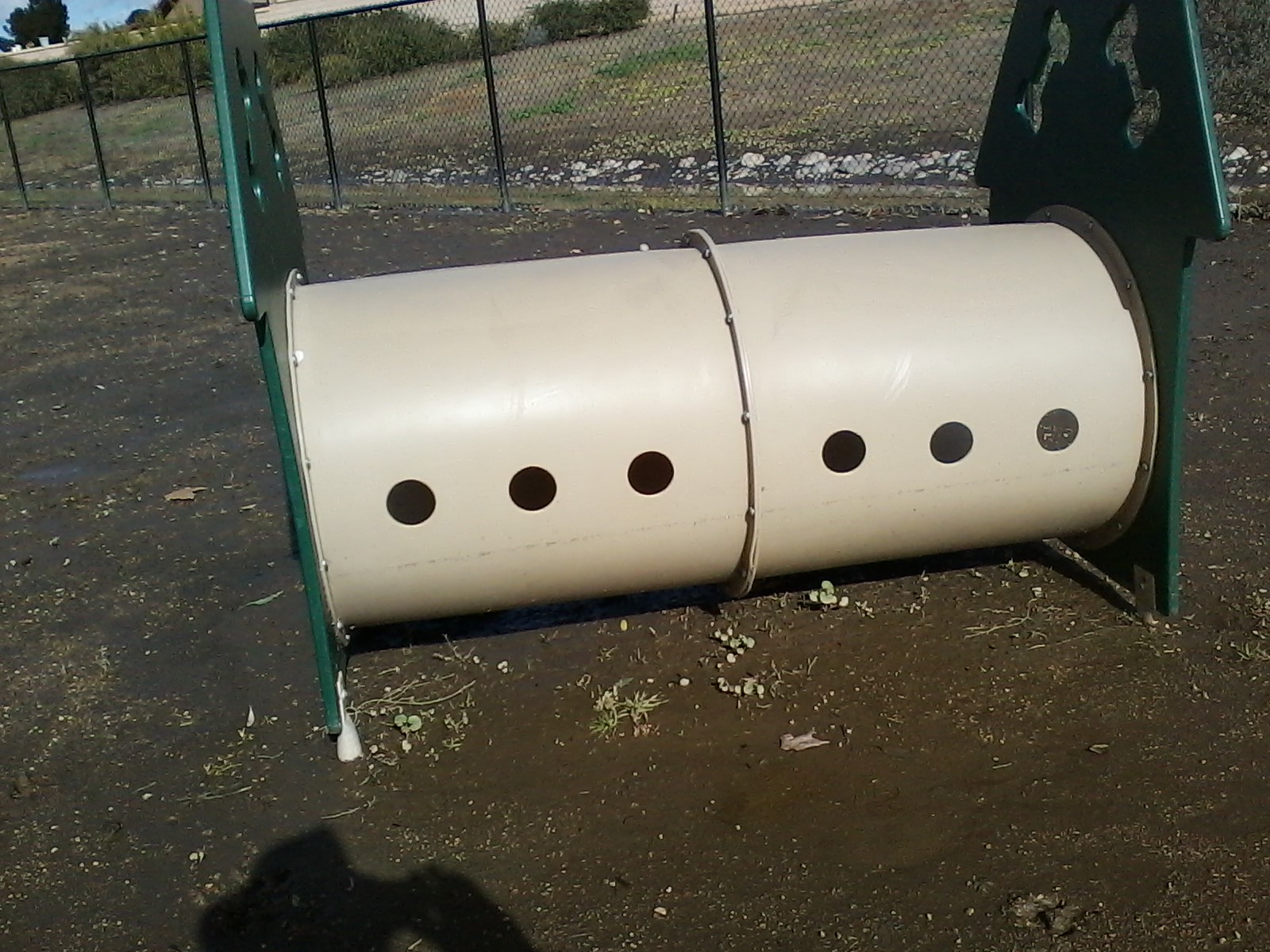 Future home of a drinking fountain for your pooch. 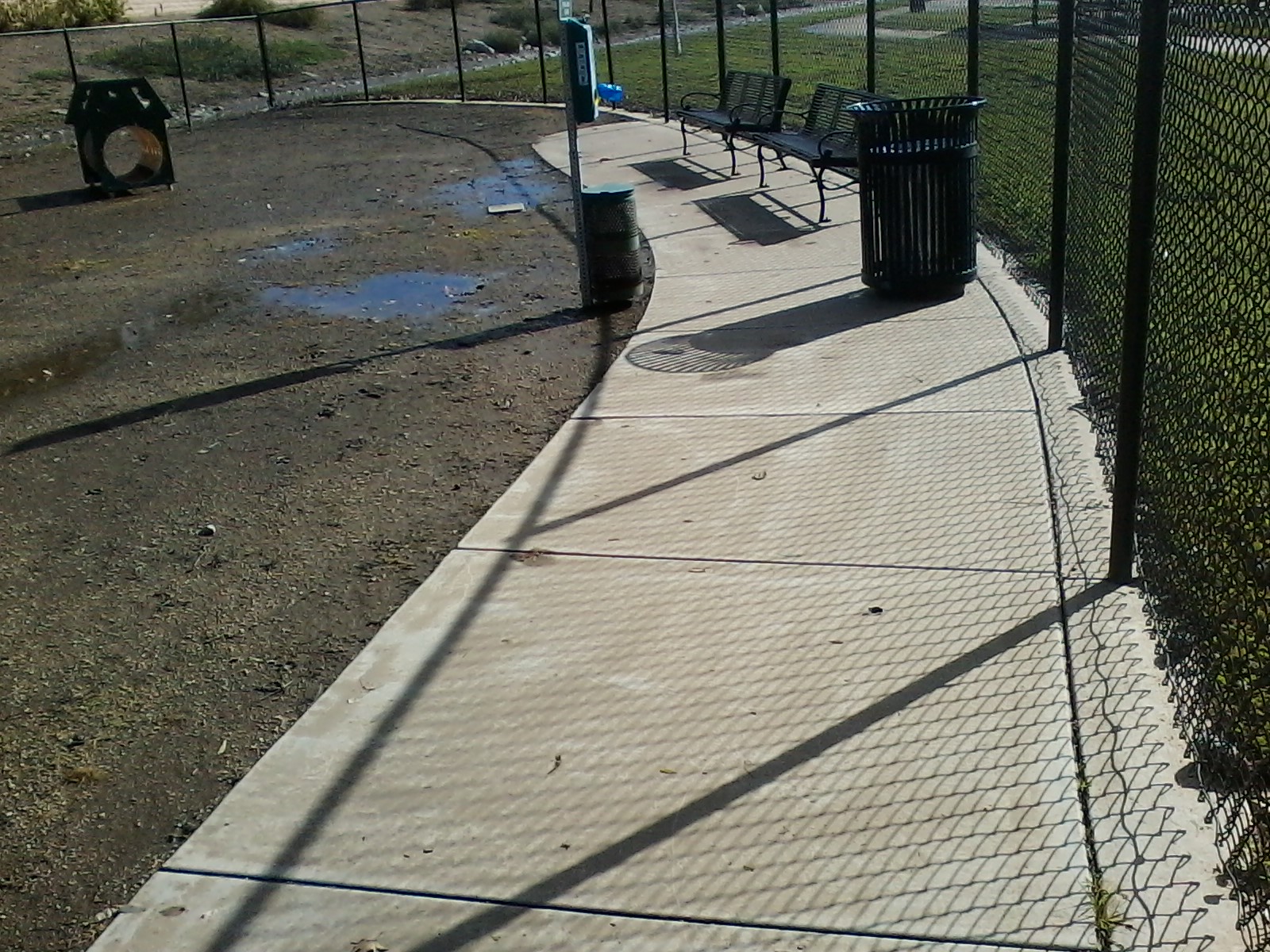 Or maybe you would like to play hangman on one of two half-court basketball courts, as long as you don’t mind a bent rim or a little mud. 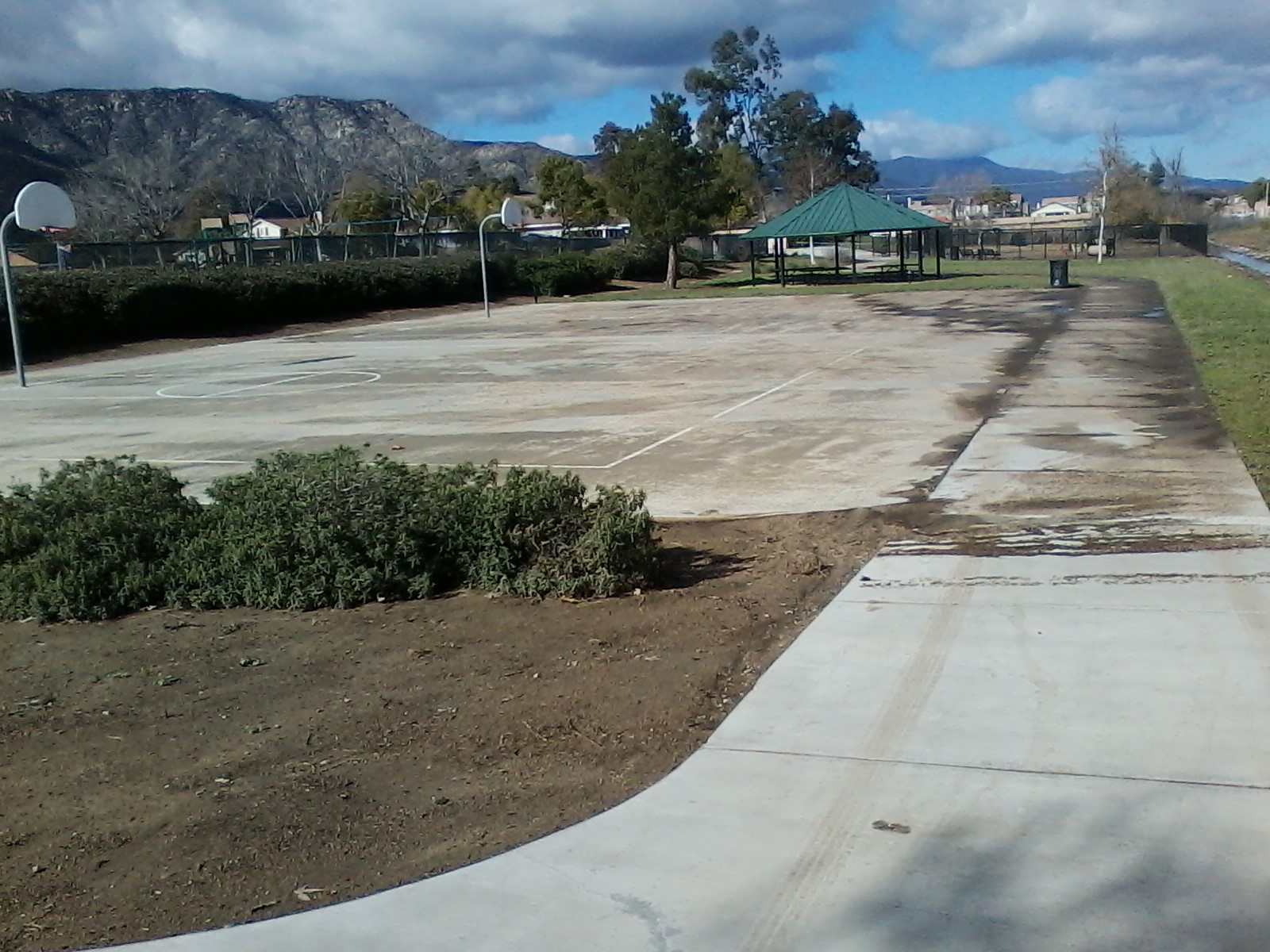 In order to prevent a traffic jam on entry there really needs to be a no-fishing sign on the bridge into this city facility. 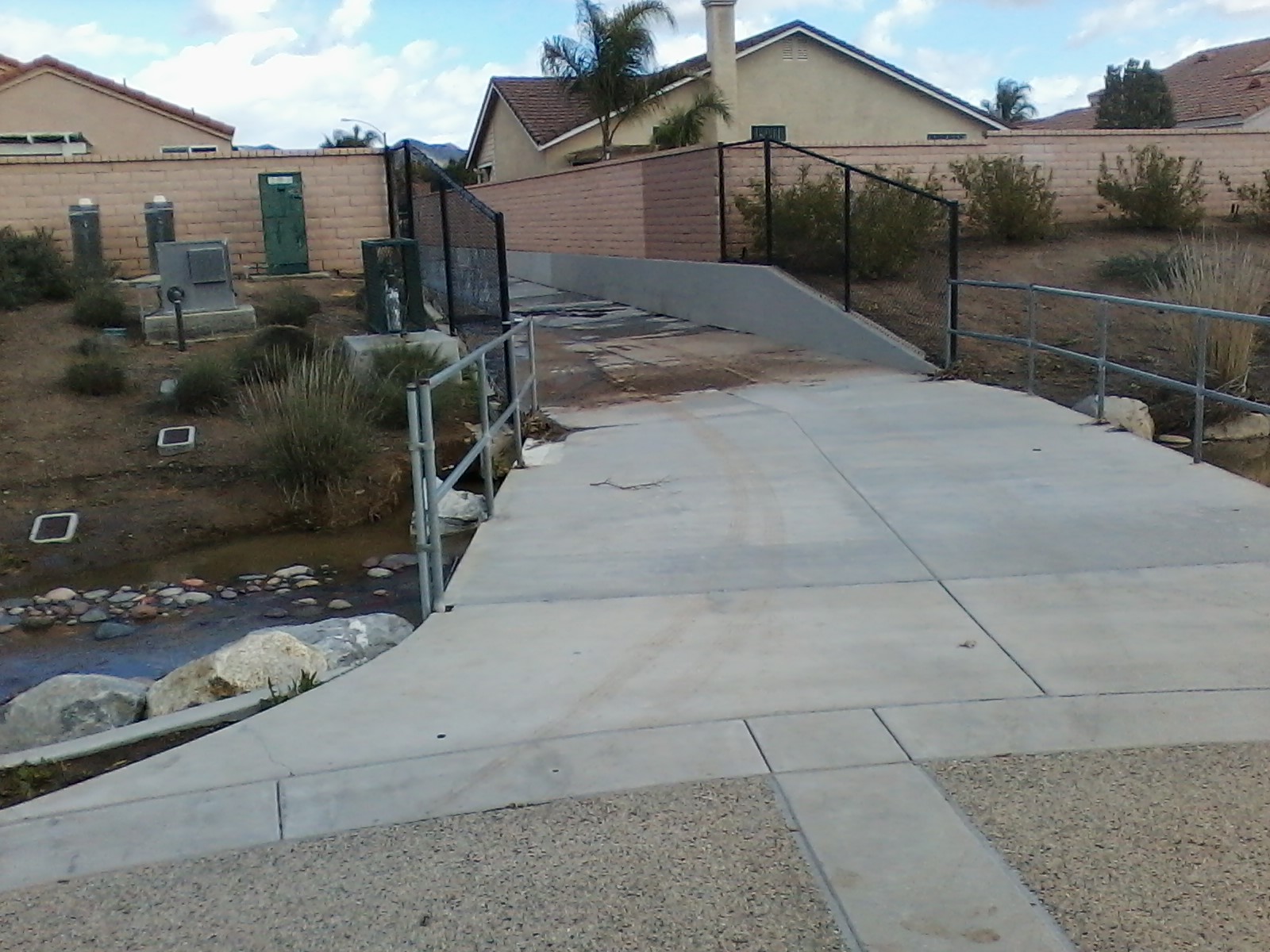 For your $28.00 a year you should be proud of this wonderful features brought to you by the city of wildomar. 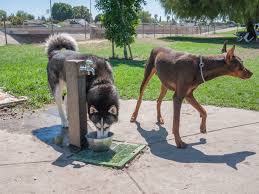 There is a move about town to install a “Drinking Fountain”, for dogs and humans, at the infamous Regency-Heritage Park located in the northwest side of Wildoslavia. While the idea has been batted about for a number of years the city has apparently located a willing child and sold them on doing a “Scout Project” to cause this fountain project to spring to life.

The idea is a good one and has been long sought after by dog owners, the few that use the DG covered dog park, as the summer months are rather warm in this part of the world where there is little grass to play on. 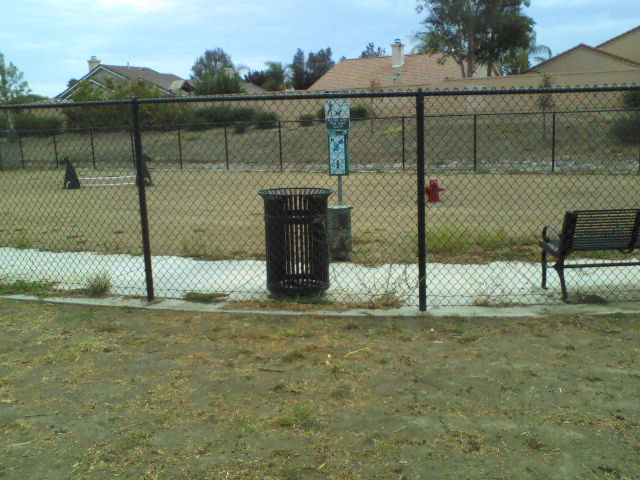 Above Picture taken in July

Even in Winter there is little grass in this neglected park 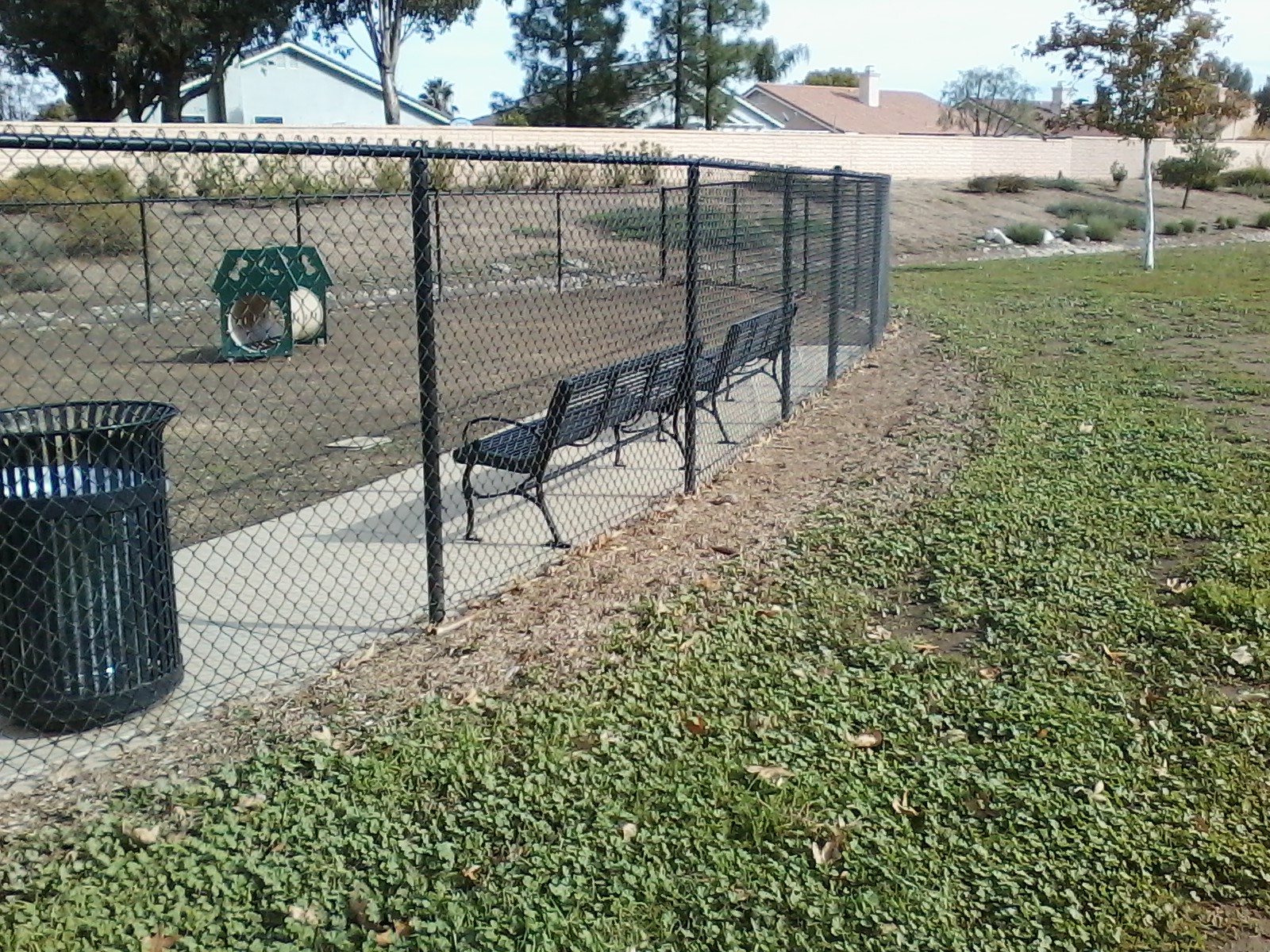 The above picture taken in December, the green outside dog park is weeds

The plan is bad plan because this park is a part of the, poorly maintained, drainage system that directs waters from several areas of Wildoslavia, namely to the south as far as Marna O’Brien Park and the hills to the Southwest of the park above the Woodmoor Tract of homes. 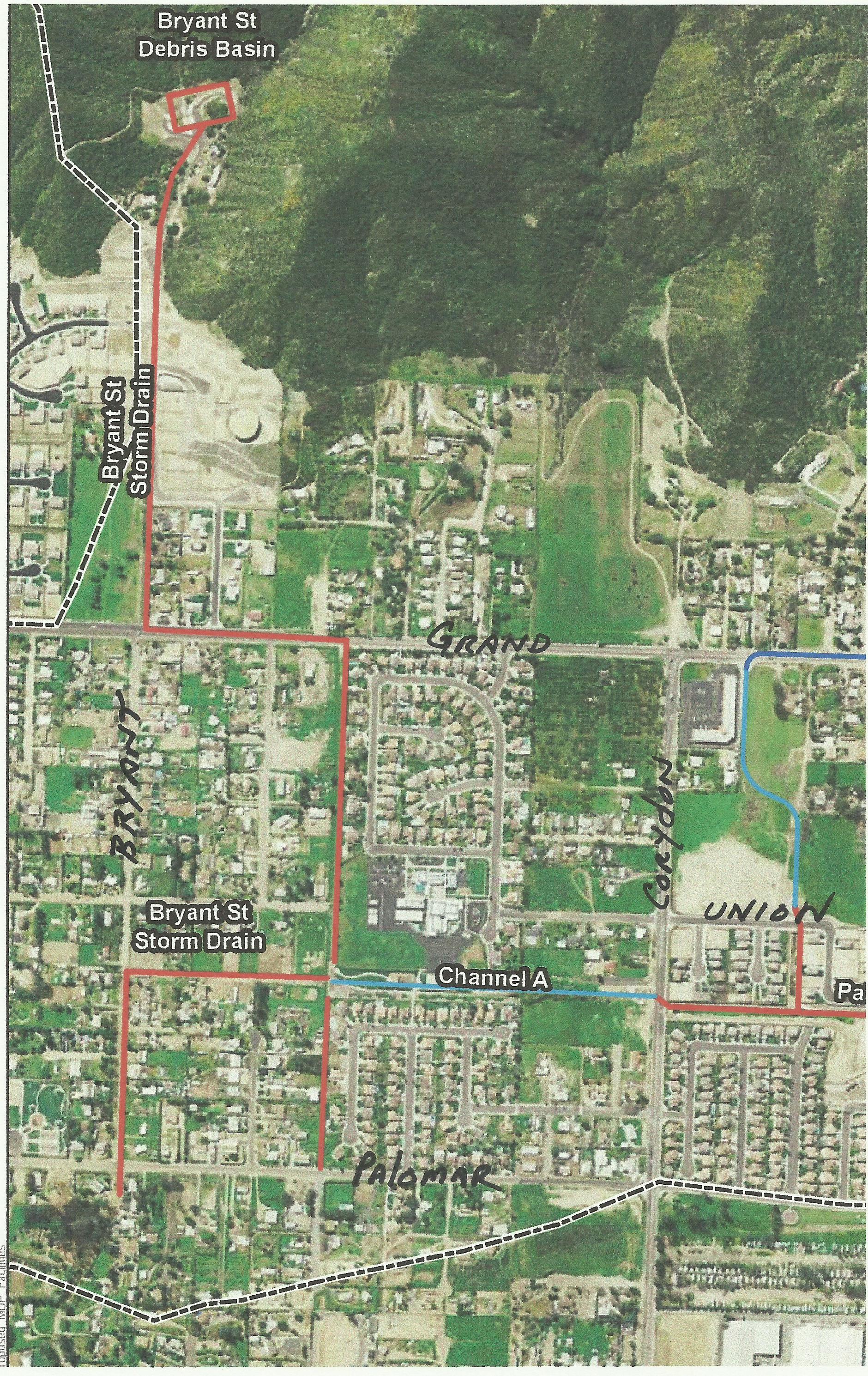 The red lines are the existing storm drain infrastructure, the blue line is the proposed additon. The following pictures show the areas where these enter the park 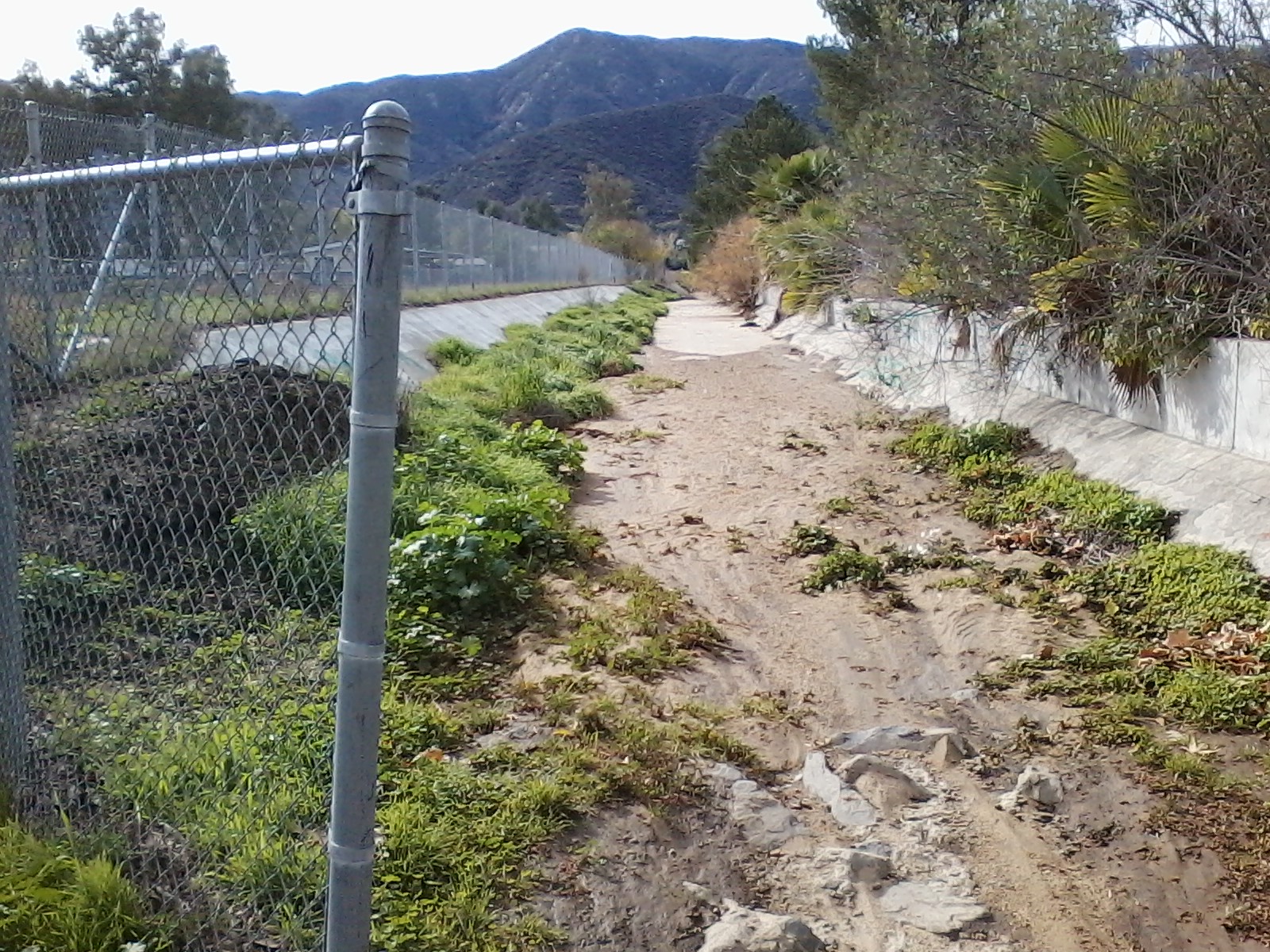 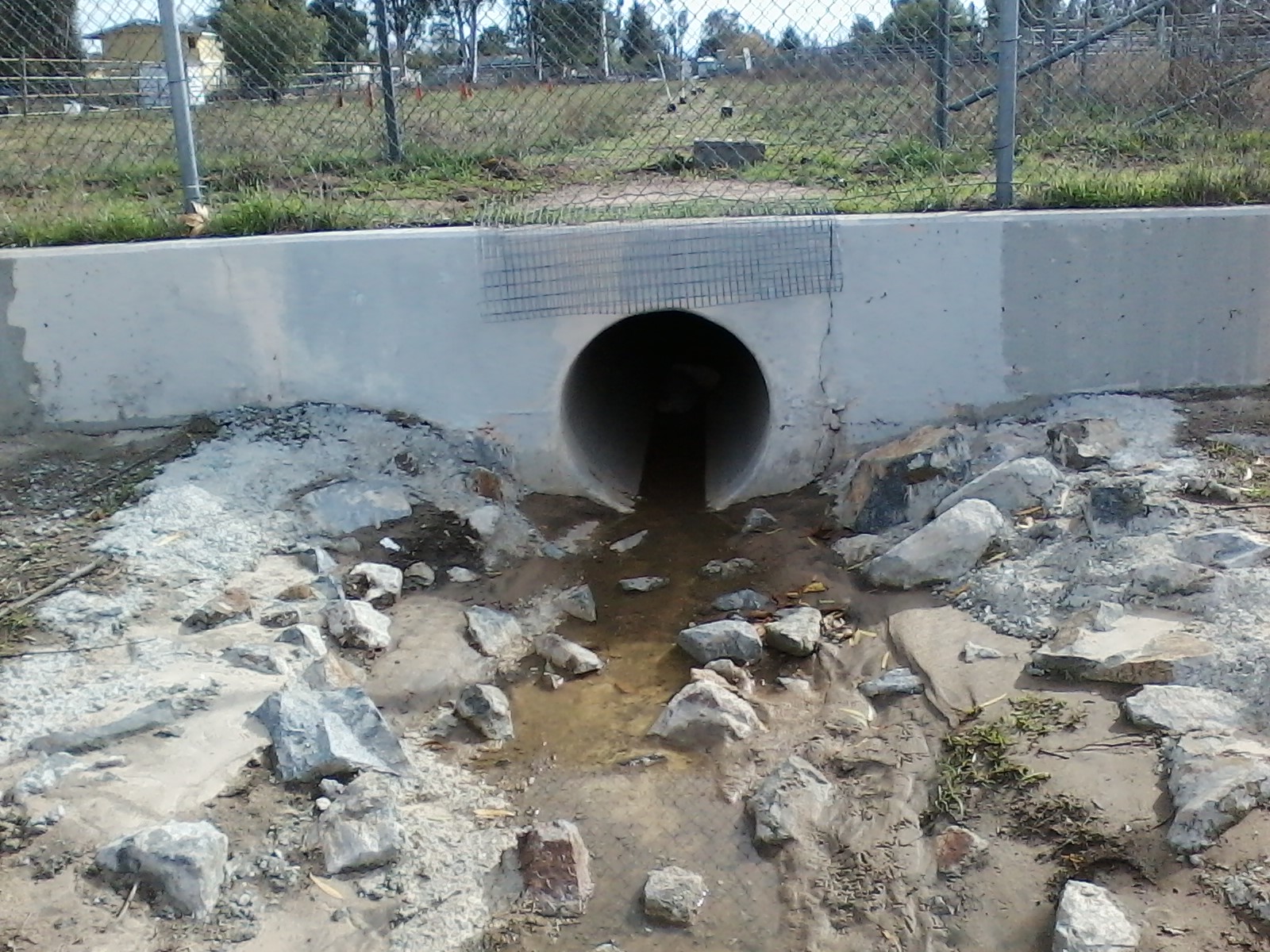 The above picture is looking south towards Marna O’Brien Park, notice the wire has been lifted to facilitate the flow of water, presumably by city staff. 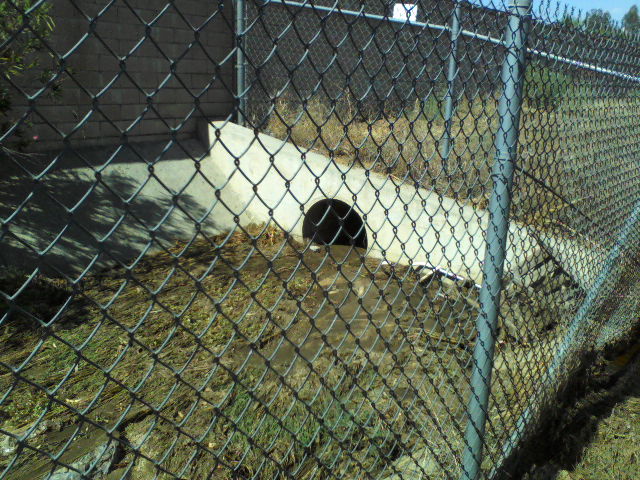 Above picture is looking east towards Palomar St. 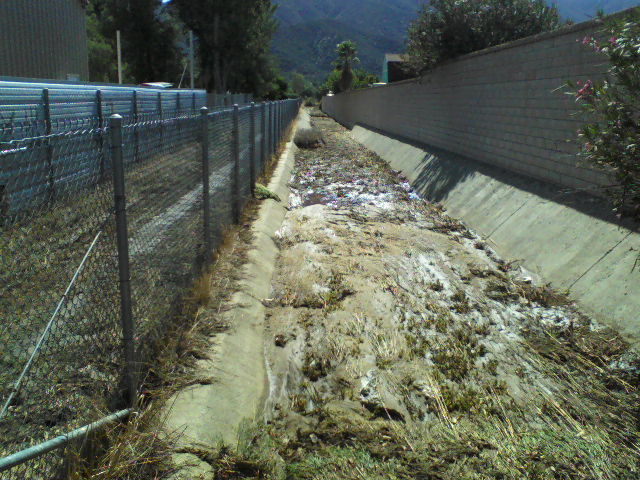 The above picture is looking into the park from the Palomar pipe, notice the debris that has been there for years and still is.

In the past it has resulted in much damage being done to this park. 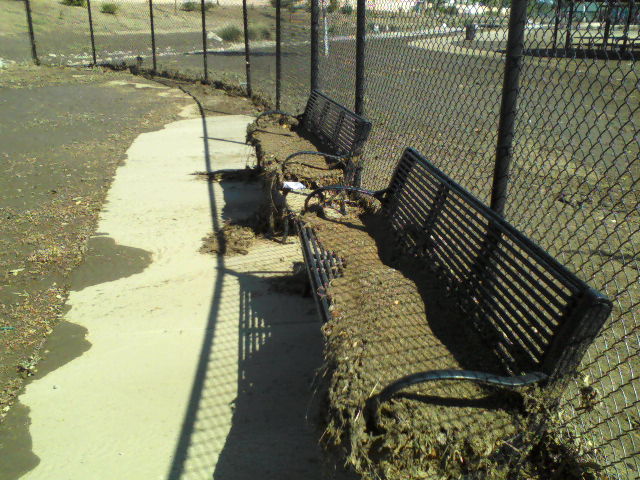 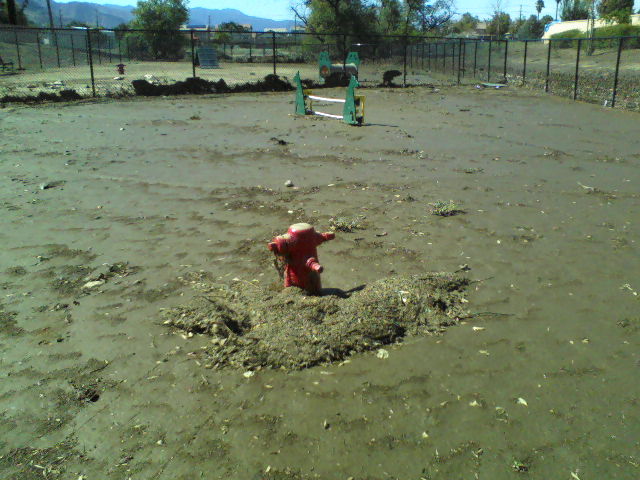 The above pictures were taken in September of 2014 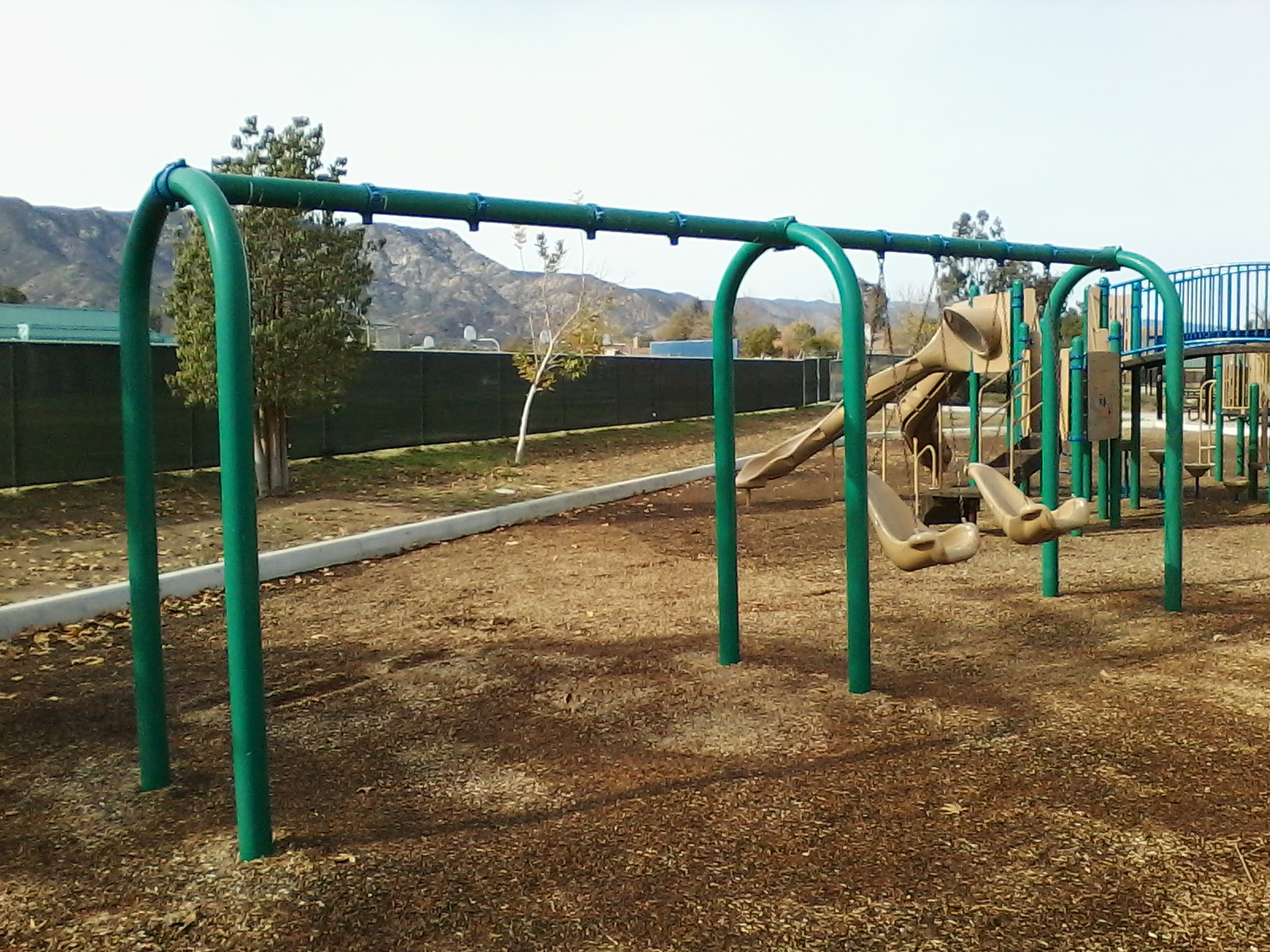 Notice the engineered material that cost thousands of dollars is saturated from a December 2016 storm. The damage is so severe the swings have been removed. 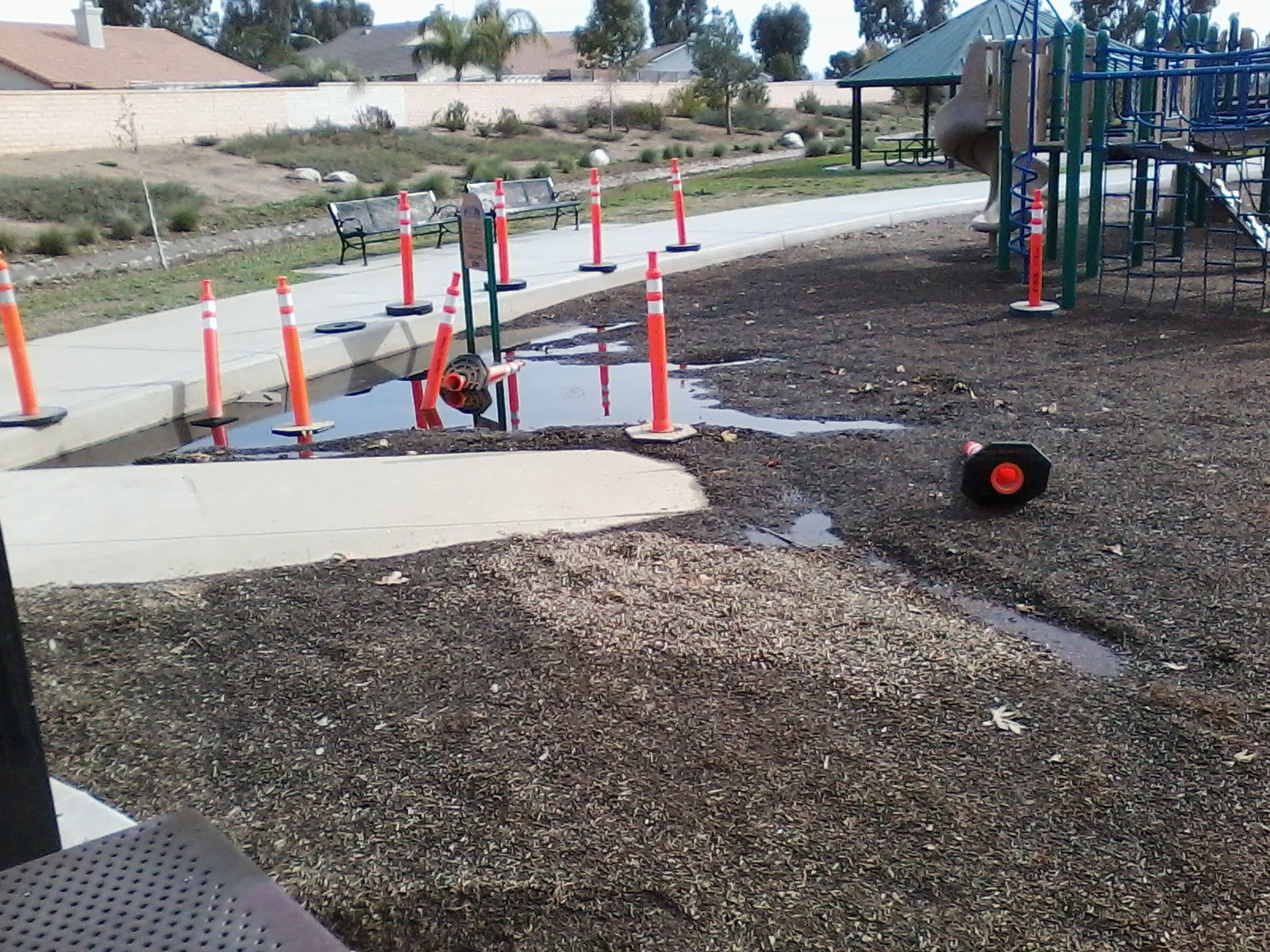 This poorly maintained drainage system for this park is slated for an upgrade somewhere in the future, brought to you by Riverside County Flood Control and Water  Conservation (RCFC&WCD), the upgrade is a part of the recently (January 2014) adopted Lakeland Village Master Drainage Plan

This Lakeland Village Master Drainage Plan (Lakeland Village MDP) calls for the current 10 foot wide X 18 inch deep channel through Regency-Heritage Park to be widened to 42 feet in width X 6 feet in depth. This new channel, referred to as “Open Channel A” will be capable of handling a 100-year event consisting of 1,115 cubic feet of water a second.
The city has known about this concept since they were notified by a concerned citizen more than 2 ½  years ago. Refer to

The above article was written in February of 2014

What does the city lose when this “Open Channel A” is constructed. Nobody really knows at the present time. The RCFC&WCD has a concept but no engineering has been done.

It is possible that 30 feet of the enclosed area currently called the dog park will disappear making the existing dog park smaller while at the same time making it more likely to survive as future flooding will be eliminated. It also means that whatever “Drinking Fountain” installed will lose its water source as the metered water is located on the east entrance nearest Autumn Oak Place.

That is unless the city plans for the new water pipe feeding the “Drinking Fountain” to be installed below the 6 foot depth of the future channel. Does that sound like a “Scout Project”, not many are qualified to operate a backhoe.