The consensus of the wildomar city council on February 22, 2017 was expressed the following vision statement:

The City of Wildomar will be a safe and active community, responsibly grown, with quality infrastructure while keeping a hometown feel.

Does Camelia Townhomes fit the bill.

First off this is going to be a gated community, therefore off by themselves and isolated from the city. There will be a no-man’s zone of at least 20 ft in width between one block wall and another, that borders single family homes in Murrieta, that will be heavily planted with tall shrubs, (Rhus Lancea, African Sumac is a dense shade tree, rather graceful with its arching branches and weeping foliage.) This no-man’s zone is an invitation for mischievousness or tomfoolery.

Per Mitigated Negative Declaration (MND) for this project, page 96, The nearest sheriff’s station is located at 333 Limited Street in Lake Elsinore, approximately 9.9 miles northwest of the project site (at 60 mph that is ten minutes away). Traffic enforcement is provided for Riverside County in this area by the California Highway Patrol, with additional support from local Riverside County Sheriff’s Department personnel. The highway patrol stopped handling all traffic related events when wildomar became a city in 2008. Our current level of service is 0.4 officers per 1,000 population.

Per the MND page 97 the project will not induce substantial population growth and therefore would not be expected to substantially increase the demand for police protection services.

Is this safe, NO

There is talk of 2 million dollars being returned to the city, but, until it gets here it’s not a sure thing

Currently the city of wildomar has one fire station located 2.8 mile away. There is mutual aid provided by Station 75 which is 2.7 miles away.  There is also Station #5 in Murrieta which is 1.9 miles away.

The population is projected to be 538 new citizens at the calculated rate of 3.3 per single family unit used by the city.

Using the State of California’s Occupancy Standard of 2 persons per bedroom plus one additional person per dwelling unit, with 436 bdrms occupancy would be 163 +872 for a total of 1035 possible new residents. (Almost double what developer projects using the city’s formula.

Furthermore, the project is not expected to result in activities that create unusual police protection needs. (city must have a crystal ball)

Again is this safe ?

As an active community the city council adopted a Multi-Use Trails map in 2011. Many housing developments throughout the city have Multi-Use Trails along their borders, some along Palomar St., others along Grand Ave.

The city is prepared to spend millions on such a multi-use trail and bicycle lane project the entire length of Grand Ave.

This site has no such trail even though one appears on the City of Wildomar Multi-Use Trail Map as W-E-02A. The developer claims the trail (Southern Immigrant Trail) is on the other side of the roadway. 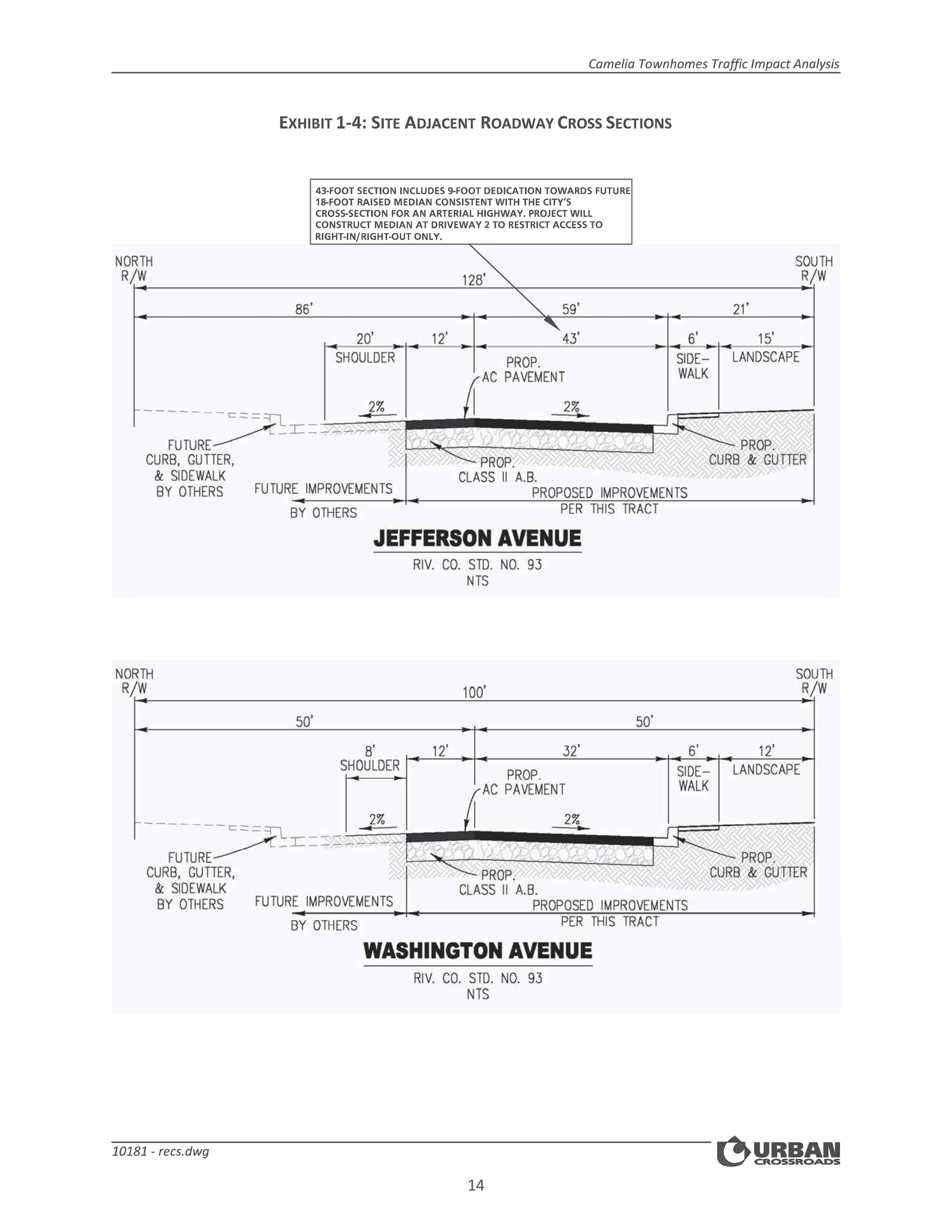 This is what the developer is required to finish before they sell any homes. Notice the asphalt extends 1/2 of the roadway plus one lane only. The rest is to be provided by whomever builds across the street. (Except for that portion  that is part of this development on Jefferson Ave. in wildomar

Our neighbors to the south have asked that their quality of life not be destroyed by this project which will hover over their backyards invading their privacy. The developers response is we will plant more shrubs. We will not lower the height of the development nor will they move the structures back to simulate the feel of single family homes with backyards.

Is it responsible growth when a planning commissioner chastises these longtime homeowners for not planting enough vegetation in their yards.

There are 20 parcels of which 16 will pay the Measure Z Tax. At $28.00 per parcel this amounts to $448.00 annually to pay for maintenance, operations and programs for the 538 new citizens (.83 cents a head per year) (Current residents pay approximately $10 a head).

The city will claim additional money will be collect through the Mello Roos fees extracted from this project, problem being there is no accountability for that money like Measure Z funds which haS an Oversight Committee.

If these were 163 single family homes the same park land and infrastructure fees would be collected along with $4,564.00 annually for maintenance operations and programs ($8.48 per head instead of 83 cents)

Per a study done by the American Library Association:  Funding levels for Riverside County libraries remain at desperately low levels, barely more than a third of the national average on a per capita basis.

In 2014, to correct this underfunding, Riverside County adopted a Developer Impact Fee of $115 per single family dwelling and $80.00 per multi-family dwelling. Wildomar in the same year adopted nothing for libraries, no books no building.

The County of Riverside General Plan Standard is 0.50 sq.ft. per per resident. Looking at Wildomar:

This is going to be difficult when you look past the immediate connection of Jefferson Ave. in Murrieta to Palomar St. in Wildomar.

Looking past means looking at what other cities connected to this corridor the stretches from Rancho California Rd. in Temecula  to Main St. in Lake Elsinore a stretch of 17.2 miles

Temecula in March of 2005 in their Circulation Roadway plan discussed key roadway improvements with included expanding Jefferson Ave from Winchester to the city line from a 4 lane arterial to a 6 lane urban arterial highway.

When looking at the HIGHWAY 395 CORRIDOR STUDY FOR SOUTHWEST RIVERSIDE COUNTY compiled in 2012 after 2 community workshops were held. 20 members of the community attended the workshop in wildomar, similar to the previous workshop in Temecula which also had 20 community members.

The Murrieta City Council approved a plan to widen Jefferson Avenue north of Kalmia Street to 6 lanes due to increased traffic volumes. In certain locations, portions of the roadway are already built to this ultimate width and would only need to be restriped to achieve the 6-lane configuration.

Caltrans noted that it will be important to analyze the effects the Corridor improvements will have on the adjacent I-15 interchanges. Highway 395 serves as the primary alternate route for the freeway.

The 395 study states the current condition in wildomar as Two-lane facilities which are common in purely residential and rural land uses where volumes are typically lower.

Keeping the Hometown Feel is Going to be Kind of Hard with traffic whizzing by at 50 miles an hour.